Yes it’s nearly over. Just the last 4,412 words to go. When it is all over we will return to what passes for normal on this blog. I will be talking about Doctor Who…

So watch the Face the Raven – I’m not putting a link as you don’t want, as River Song would say, ‘Spoilers.’

The End Is Nigh

No this isn’t some strange doom-saying type thing; nor is it a dyslexic attempt to talk about a certain science guy.  – no I’m of course talking about my writing.

I’ve written 31,510 words so I can see the end. I’ve almost finished the last chapter, I think, its just the bits before that are difficult anyway… 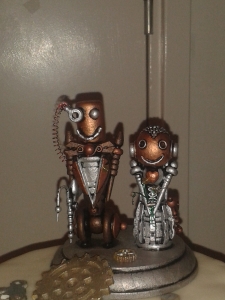 I’m going to talk about robots again – and I’m using this picture again. I don’t have another robot picture.

Anyway I’m got a robot in my novel (14,128 words so far) and writing for this robot is most difficult. I suppose that this is the same thing as I discussed last time with the alien characters. With a robot it is more complicated.

With an alien character you can invent new body language. You can say that flipping back their antenna is their equivalent of a shrug for instance.

What about a robot with an expressionless face. It can’t smile, it can’t do anything to express itself other than in what it says.

The nature of the robots in this novel is still confusing to me. Yes, I did just say that my own novel is confusing me. I want to have AI but the question is how intelligent are they? I’m thinking that they’re on a spectrum. Some of them will be just machines, nothing more than a computer except it can speak so it might seem like more than a machine, others will be of animal intelligence, and some will be truly sapient.

This though is writing on the fly – there is no time to correct a mistake. The watchword, or rather watch phrase, for NaNoWriMO is ‘I’ll fix it in post.’ Something I’m not very good at.

So I’m still having good and bad days with the novel. I’m confident that I will meet the target of 50,000 words by the end of the month. Although that may not constitute the end of the novel.

So Far So Good

So today is day five of nanowrimo and its going quite well. I’ve written 682 words so far today. My total word count is 8941.

I don’t wish to count my ostriches

(I have a picture for that) – but at this rate I should be able to finish a few days early.

I’ve already gotten a feeling for what this might be like. Yesterday’s 2000 or so words were a bit of a struggle – and took two and a half hours. Today it seems to be going much better.

In fact in general its going a lot better than I expected. I think that might be down to the deadline. I usually edit as I go (and to within an centimeter of its life) but I can’t do that here. That does mean that when it comes to the end it might be a bit of a confused mess.

One of the confusions is the aliens. I have to keep looking back so that I can remember; how many limbs they have, the nature of the limbs, their eating apparatus, whether they have gender, and if so what gender that is.

I’m beginning to see why humanoid aliens, which are kind of boring, are popular even in print – when you don’t have to worry about a CGI budget.

Anyway back to novel I go.

Today is the start of National Novel Writing Month. This time around I’m going to attempt it. The idea is to start a novel  from scratch. I’ve had this idea moving round my brain for a while so now is the time to embark on it. I’m also going to be doing other writing, which I admit maybe a little ambitious. However with a combination of less sleep, a takeaway or two, very simple meals, and less you tube I can find the time.

So posts here might be a little few and far between in November. I’ll try to post progress updates once a week. 50,000 words in a month is a tall order.