A Postbox Bearing the White Had of Saruman

We’ve been having great weather here in Wales. It Looks like we’re having a summer this year. Did I say that last year? Probably. If anything it’s a little too hot. Now I’ve stepped into a British cliché. 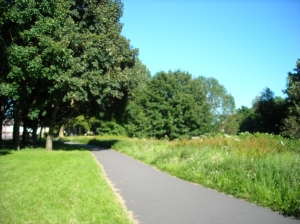 When the weather is this good I feel I need to use it. So today I went for a walk. Believe it or not this picture was taken in Wales. It is true that we get a lot of rain here but not today.

I’ve been talking to someone on an online dating site. She suggested writing a poem. Poetry is, I suppose you could say, the final frontier for me. I’ve done some non-fiction, scriptwriting, short stories and a novel but poetry is something of a mystery. I decided to try long hand for planning. My issue with poetry is that syllables and structure have to be considered. For a story a sequence of events is enough for it to be considered a story.

Once upon a time there was a very poor man. One day he was sat in a shop front shivering. He had the good fortune to be passed by a millionaire who gave him a job as a butler. He was well paid and wanted for nothing. He lived happily every after.

That is a story. Its not a good story but you can’t say its not a story. If I were to put together a sequence of images it wouldn’t necessarily be a poem.

From there I walked along the cycle path. I stopped by the first bench and sat near the weir and wrote.

There is nothing like a computer to make you appreciate paper. On paper you can scribble things out and write on the side.

Today, as mentioned above, is now over a week ago. I haven’t formed the images and ideas into a cohesive poem… yet. The poem, such as it will be, will be posted to this site soon. Maybe a week. We shall see.