Christmas has come and gone for another year – and soon it will be a new year.  Which means many of us will be making new year’s resolutions. And most of us will abandon them before February. I would give you advice on how to keep them if I had any to give.

I think Michael Mcintyre sums up Christmas quite well. For me it was very much like this.

… I was working on Boxing day.

There are many people who have to work on Christmas day itself. In my view this should be limited to essential services only. This doesn’t include a corner shop but there is a shop I know of that is open on Christmas day. I’m just glad I don’t work there.

For me Christmas isn’t important for religious reasons. I like it for the family time, the food, and the presents – giving and receiving. Its lovely to see someone smile as they receive their gift. I know that sounds a little hokey  but its true. Nothing beats a smile.

While I’ve got you I’d just like to say there is no offence in saying Merry Christmas. I’m not a Christian but why would this offend me? Someone is wishing me well. Christmas is just the name for the thing. If anything I’m more offended by the ‘merry’ rather than the ‘Christmas’.

I protest I am not a merry man!

The time between Christmas and New Year is quite strange. Today was a bank holiday in the UK.  Then we have two days of normality then it’s the end of the year. Then back to normality again. 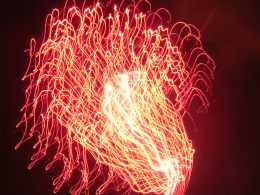 Since I didn’t do so well with resolutions last year I probably won’t be making them officially this year.

Having said that I did get a shinny new notebook for Christmas, which will become my diary, so it would be good to have something to write on the first page.

I actually think the thing that would do me the most good is to try and relax a bit more. I set myself targets, mostly for writing, and feel guilty for not meeting them. Which is just silly as its only me that’s disappointed.

For New Year’s Eve I’ll be at mum and dad’s along with my brother and his wife – so a nice family gathering culminating in a countdown where nothing happens.

Happy New Year everyone. See you next year.