It’s Life Gym But Not as We Know It

Five weeks ago I posted here about joining a gym. I’m  still going! Does that count as an achievement? Maybe. If I’d made going to the gym a New Year’s Resolution I’d be into February. The common wisdom is that that is unusual.

I actually like going to the gym. Previously I exercised using wii fit. Despite the wii being in my flat, obviously, I never quite felt like exercising. There was no time before work and I was tired after work. The gym is better exercise yet doing that after work feels easier. This is probably because when you get home you want to slump.

The annoying thing about the gym is the music. Sometimes there is multiple competing music. The gym is open plan so when there is a class it’s music, or in my view noise, plays on top of the general music. Meanwhile I’m trying to listen to my own music.

Exercising with music makes it easier. I find it gives you something to aim for. When the current treadmill level gets too difficult I’ll try and wait to the end of the song to reduce it.

The music is my only real gripe about the gym. It does seem just a tad strange to have it when most everyone has MP3 players or phones.

What’s on my gym playlist?

I actually have three playlists, of different lengths, because sometimes you only feel like exercising for a short time. This is my long playlist…

Tagged as 99 Red Balloons, Bring it all back, Calm After the Storm, Children of the Universe, Dancing in the Rain, Emma Blackery, Everybody Wants Ya, Fear the Future, Giorgos Alkaios & Friends, Go the Distance, gym, Hard Rock Hallelujah, Hepburn, Hunter of Stars, I Quit, Lena, Lordi, Mariya Yaremchuk, Molly, Nena, No More Cry, Opa, Ruth Lorenzo, S Club 7, Satellite, Sebalter, Shine, Star Trek: The Next Generation, The Common Linnets, The Corrs, Tick-tock, Tolmachevy Sisters, Two in A Million, Would You Be Happier?

Reach For the Stars

On Sunday I went to Cardiff Comic Con. It is certainly a much smaller affair than its big brother in San Diego but for Cardiff I only have to pay for the train! I went to the event last year only this time I actually plucked up the courage to get a couple of autographs! I know its silly to be nervous of such things, they are just people after all, but I could be nervous for Wales.

When speaking to the special guests you only get a couple of seconds. Amongst others there was: Caitlin Blackwood, Eve Myles, John Rhys Davis, Bernard Cribbins, David Gooderson,  Christopher Judge, and, Hannah Spearrit. 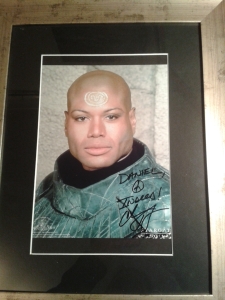 It was good to meet Christopher Judge and shake his hand. The picture says ‘Daniel, indeed!’ I only hope that when I go next year I actually manage to form words.

Sunday was definitely the day to go. It was so quite when I arrived, compared with the queues the previous year, I thought that maybe it had been cancelled. Going on Sunday also meant I got to meet Hannah Spearritt; or Spearmint as my spell checker wants to say, which is not totally inappropriate as she is very sweet.

You might know her from Primeval but I know her from S Club 7. I remember their TV series and still own, and listen to, their music. I know it is considered naff by many, and okay it is a bit, but I make no apology in saying that I like their music. S Club 7 and B*Witched were the fist two ban 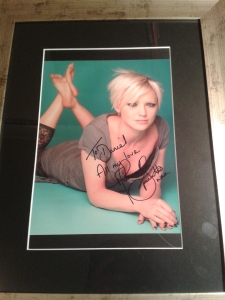 ds I really liked. I remember that B*Witched’s  first album was available on cassette tape! (I’m old!) In the case of S club I remember being so eager to get their album I was asking about it about a week before its release.

It was great meeting Hannah. She was very sweet and delightful. I know that is probably a tautology and I don’t care! On the picture it says ‘All my love.’- Yes I was a little smitten.

As you can see I bought frames for my pictures. They will now take pride of place on my wall – as soon as I have a wall that is.